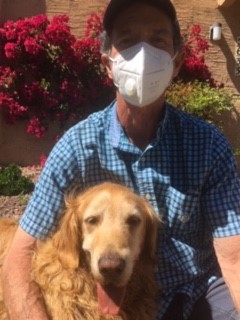 I got my blood work results back from the lab at Eisenhower Hospital today and the news was good. My A1C, the marker that determines diabetes, is 5.9. That’s nearly normal. My viral load for Human Immunodeficiency Virus (HIV) is undetectable and my T-cells sit at 700 which is within the normal range.

HIV has had a profound presence in my life for nearly forty years. Ever since 1981 when the first opportunistic infections appeared such as Kaposi’s sarcoma, a rare type of cancer that develops from the cells that line lymph or blood vessels. I can remember waking up at night worried that I might get sick. Back in those days, AIDS was nearly always fatal and no one knew how it was spread. To date, HIV has killed 750,000 Americans alone.

I remember dressing like astronauts to visit friends in the hospital sick with AIDS. Like today, hospitals in major cities were overwhelmed with patients. In San Francisco, where I Iived, those early AIDS patients were put in isolated rooms and left there. It’s the truth of those terrifying times. I can only imagine how many died alone without the comfort of family or friends. I didn’t suspect that the nurses or attendants there were homophobic. They were just terrified like the rest of us of dying themselves. Evangelicals like Rev. Jerry Falwell, founder of the Moral Majority in Virginia, routinely stated, “The AIDS virus isn’t just God’s punishment for homosexuals, it is God’s punishment for the society that tolerates homosexuals.” I wonder who his son will blame for this pandemic?

I feel sad and angry that so many people will die needlessly in this COVID-19 pandemic. I honestly believe it could have been stopped. It should never have gotten to this point. It doesn’t surprise me with regards to the current administration’s lack of urgency.

It was six years into the HIV epidemic before President Reagan gave a speech in 1987 about AIDS.  Only after his friend Rock Hudson died in 1985 did Reagan take it even remotely serious. Nearly 90,000 Americans died of AIDS while Reagan was President.

For 15 years, from 1981 till 1997, I worried that I would succumb to HIV. Why would I think otherwise after I watched the love of my life die in 1987? I remember vividly the day when the first KS lesions appeared on his body. I was sure that I was next. It wasn’t until 1997 when safer medications became routinely available that I began to hope that I might survive.

Now, there’s a new pandemic. And many of the leading AIDS doctors and scientists and activists are now being interviewed on the nightly news, sharing their experience in the fight to cure AIDS from years ago.  It’s surreal, honestly. Dr Fauci is one of my heroes in the HIV battle and now here he is once again the face of knowledge and understanding about the novel COVID-19 virus. The man most of the country trusts for advice and a strategy.

Dr. David Ho, of Aaron Diamond AIDS Research Center, was a leading scientist in finding HIV treatment. Now he is leading the charge to find treatments for the corona virus.

Gregg Gonsalves, a Yale University epidemiologist and health care activist was also an AIDS activist. He was part of ACT-UP, the AIDS Coalition to Unleash Power. I was a member of ACT-UP as well. Time Magazine called ACT-UP “the most effective health activist (group) in history” for “pressuring drug companies, government agencies and other powers that stood in their way to find better treatments for people with AIDS – and, in the process, improving the way drugs are tested and approved in the U.S.”

Now, thanks to all that past research and programs at the NIH and the FDA that were funded to prevent AIDS, that research is now being applied to the novel COVID-19 virus.

We can thank ACT-UP for this triple drug combination attack against this virus. We’re hearing phrases like “viral load”, protease inhibitors, attacking the virus at different places! The HIV medication Kaletra is being tested against COVID-19 along with other AIDS medications. All of these are familiar terms. I thought that these words were in the past; that they were behind me. Now here they are again on the nightly news.

The coronavirus has a lot of folks freaked out, and rightly so. But I have to admit, I’m not that worried about my own health. I live a life framed by a pandemic all ready. I can’t worry any more than I already do about HIV.  I’m not careless or nonchalant about it. I am wearing gloves and now we have protective masks to wear out of the house.

I’m confident we will get through this new pandemic if we listen to experienced experts such as Dr. Fauci and take this threat seriously. Stay home, stay safe, and as a pandemic survivor I can tell you there is hope.

Do You Let Your Dog in the Kitchen?