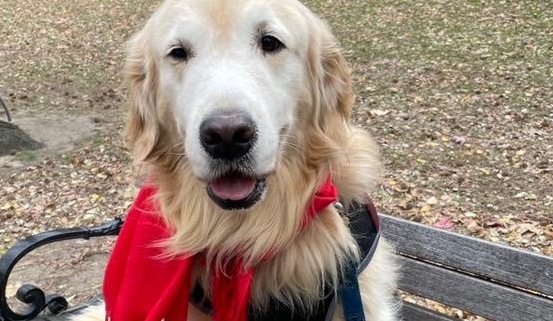 As we were driving to Boston, Franklin stared out the side window curiously. I turned and explained to him,
“Franklin, that’s snow.”

James wondered out loud, “Do you think this might be the first time he’s seen snowflakes?”

“I doubt he ever saw snow in south Florida.”

When we arrived in Boston the flurries had ended. We walked up Charles Street into Beacon Hill, one of the oldest and most beautiful neighborhoods in the city. The brick sidewalks were lined with gas lanterns decorated with Christmas wreaths and bright red bows. It felt like we had just stepped into an old-fashioned colonial Christmas card. All that was missing were the Dickensian carolers on the corner singing “We wish you a Merry Christmas.”

Through the holiday shoppers we spotted our friend, Ali, who we met last summer at the beach in Provincetown. She introduced us to her friend Bob, who presented to Franklin, Rosie, his pretty six-year-old Golden Retriever. The two kids sniffed each other and a friendship was sealed.

As we strolled along on our way to Boston Common we passed families with strollers and dogs. Many of whom, surprisingly, were Golden Retrievers. There had to be six or seven of them. We even bumped into a Golden and his dad who we knew. This was definitely a Golden neighborhood.

There was barely room to walk on the sidewalk. Normally, I don’t like crowded places like this. But today it was exciting. It was good to be in a city with lots of young energy. Franklin, looking dapper in his new, red holiday scarf, and sweet Rosie, got lots of attention.

We entered the “Common”, which was established in the 1630s. It was originally used as pastureland by the Puritans. In the 1830s it became the first city public park in America. But we weren’t there for a history lesson, we were there to see the lights and decorations. We walked through the Common where on the outer boundary of elm trees were strung different colored lights. Two of the oldest elms were planted by John Hancock.

It was freezing cold that day so the brisk walk kept us a little warmer. James and I were definitely dressed up like folks from Lapland with scarfs, hats, gloves and sweatshirts, thermal shirts and long johns and winter coats. The Goldens thought the weather was quite comfortable in their fur coats. We stopped for pictures of Franklin and Rosie sitting together on a park bench, which caused a gathering of onlookers snapping their own pictures. (Make sure you check them out at the bottom of the blog.)

It had been a long time since I was in the Common to see the decorations and lights. As a young boy my parents used to bring us here in the early evening to see the festooned decorations and the live reindeer corralled in a fenced-in area. Afterwards, we’d get a hot chocolate and a blueberry muffin at the Pewter Pot Muffin House. It was always one of the highlights of Christmas.

For our own cheer, we stopped at the “Thinking Cup” on Newbury Street. It was a spirited and crowded shop. I had the best hot tea latte I had ever had. James was pleased with his caffe mocha latte. No whip. With two shots. Our friends sipped hot chocolate. While the pups slurped from their water bowls.

Franklin was sad to see Rosie depart as Bob had another commitment. To help lift Franklin’s spirits we continued across the wet slushy grassy mall, past the outdoor skating rink mobbed with families, to the giant, official, city of Boston Christmas tree. The perfect cone-shaped, forty-five-foot white spruce tree was protected from onlookers by a short white picket fence. Multi-colored lights, my favorite, were strung from top to bottom, around the entire tree, creating a celebratory atmosphere.

Since 1971, Nova Scotia has sent a tree to Boston to thank them for the help they provided after the Halifax Explosion in 1917. A disastrous explosion triggered when two ships collided and one had high explosives on board. Nearly 1800 people were killed resulting from the blast, fires and tsunami that the explosion caused.

Ali knelt down next to this historic tree with Franklin and reenacted her love-at-first sight, beach kiss from last summer when she first met Franklin. Then I joined her on his other side. We wrapped our arms around each other with our boy squished between us, careful not to muss his holiday apparel.

As the winter sun set on this cold December afternoon, it was time to head home. Our outing to Boston was cheery and bright. Spending time with Ali reminded us that there is no better gift than time with a friend. It was the perfect way to ignite the holiday spirit.

Happy Holidays to everyone from Franklin and me.