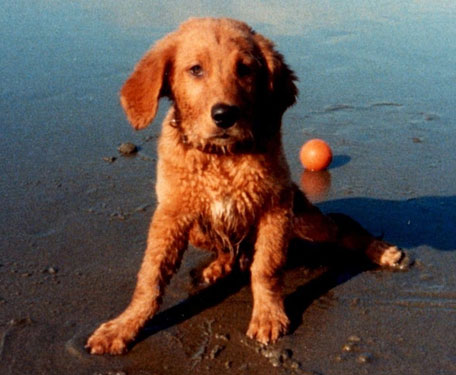 I never had a dog growing up in South Boston. We lived in the middle apartment of a triple decker house and though we lived right across the street from a huge city park our parents made sure me and my brothers were always busy with sports and had no time for a pet.  That’s why we were so excited the day that my grandmother and grandfather brought home a Golden/Lab puppy and named him Duke. He was a caramel-colored dog with huge paws and lots of energy.   We only lived a couple of blocks from my grandparents so we got to see “Dukie” often.

They lived in the middle apartment of their own triple decker and with a small back yard to play in. Our favorite thing to do was to drop a ball from the second story porch and watch Dukie retrieve it. The way he bounded down and around the wooden steps to the yard below, grabbed the ball with his wet mouth and then huffed and puffed back up the steps made us giggle with delight. Poor Dukie never got a moments rest.  With me and my three brothers along with my mother’s siblings, six of whom still lived there, it was no surprise that he liked to hide out on my grandparents’ bed for a break.  And even though my grandmother was fond of saying, “That damn dog is on the bed again.” Not much was ever done to keep him off of it.

With so much love and exercise, Duke lived a long and healthy life. It was a sad day for us all, when at fourteen, he got sick.

It wasn’t until I was 24 that I got to experience the joy that I felt with Dukie, again.  It was just before Christmas in 1983 when my partner, Rick and I drove in our giant Buick Le Sabre to pick up the runt of the litter of Golden Retrievers. He came home with us in a shoe box when he was eight weeks old.  Our new puppy bounced around in my lap. When I swaddled him like a newborn and touched his sweet tiny black nose, he bit my finger. This being my first dog, I was surprised how sharp his baby teeth were, they stung a bit. Within seconds, he was gnawing on the sleeve of my jacket. I’d never held such a young dog before and he squirmed his way out of my arms and slid on the front seat over to Rick’s side. Even he, the cautious driver, couldn’t resist reaching down with a hand and scooping the ball of strawberry gold fur up into his lap.

Once in our apartment, he waddled from room to room, following us wherever we went. We had covered the back porch with old newspapers and introduced him to his housebreaking room. I had never done this before and was nervous about my ability to accomplish this first goal. To our astonishment, he walked right across the sports section of the New York Times and piddled on a picture of New York Yankees manager Billy Martin. As a staunch Red Sox fan, I couldn’t have been prouder of my boy. Rick smirked, knowing my baseball loyalties, and said that our dog was going to make my job easy.

When we settled into the living room, the new addition to our family kept going to the staircase in the hallway and looking down at the door. It seemed he expected someone to come or else was eager to leave. “He’s not sure this is his home yet,” Rick said.

“Poor guy. We took him away from his mother.”

Rick assured me that by tomorrow he’d know that this was his home. Afraid that he might fall, I got up and carried him away from the stairs and into the living room.  As we sat on the couch, I ran my hands through his soft fur. I couldn’t restrain myself from kissing his forehead over and over again. I felt like I had to get as much love in as possible right there and then before someone took him away. I couldn’t believe he was ours. Then he wiggled away, as though he had had enough smothering from me, and bounced and tumbled over to Rick’s lap where the scene was repeated. Then Rick slipped his arm around my shoulder. I could tell by the show of affection and his wide boyish grin that he, too, was thrilled to have a dog.

How I Became a Dog Lover – Part 2
Scroll to top