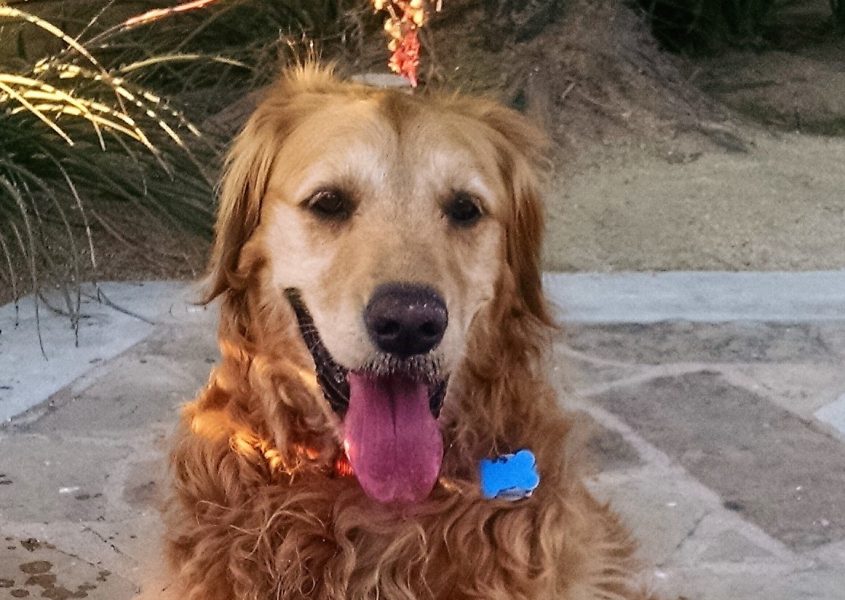 Life can change on a dime. Last Saturday evening we went out for dinner with some friends to a seafood restaurant. It’s a place we always take Morgan and bring his food along.  As we ate our dinner I wondered why Morgan wasn’t sitting next to me looking up hoping a French fry or chunk of Cod would fall into his mouth. When we got home he was lethargic and seemed depressed. By bed time he was drooling and it was clear to me that he wasn’t well.

I called the emergency vet, thirty miles away, but the doctor was unavailable to answer my questions and the volunteer said it would be at least a four hour wait for non-emergencies. At this point it was 11 pm and Morgan didn’t seem like an emergency so I decided I could wait until morning when things always seemed better. Needless to say I didn’t sleep much. Throughout the night I listened for his snoring and several times got up to check on him.

The situation remained the same on Sunday. He just laid around the house. I couldn’t figure out what was wrong. He didn’t eat, which is highly unusual for him. He wouldn’t even take a Zuke’s organic oat and berry treat. He did drink his water though and I decided I would give it one more day for him to snap out of it. I thought maybe he had a dog flu.

On Monday morning I took him to my vet as soon as they opened at 8 am. X-rays showed a large mass inside his mouth near his throat. When I touched underneath his jaw I felt a large rock. Life is fragile. More so for our canine friends and once you’ve had a 4-legged family member cross the bridge that experience stays with you. At least It does for me.  I found it suddenly difficult to breathe and remembered the deer in the headlights look he gave me when I rubbed under his throat Saturday night. But I didn’t think anything of it at the time.

Since X-rays only show a mass but not what it is, we treated him with antibiotics, hoping it was an infection.  Throughout the next two days I watched for any sign to determine which direction the situation was heading.  He seemed to eat again and I thought things were getting better. But then he stopped drinking and I was sure things were getting worse. The antibiotics weren’t making the rock get any smaller. But not much time had passed even if it seemed an eternity to me. The next vet appointment was for Wednesday afternoon.

Tuesday, James left for work in San Francisco and wasn’t returning until Friday. Morgan and I were on our own.  I knew it would be a long and lonely few days but I had to be strong for Morgan. No matter what, he needed me to be there for him. My emotional distraught had to wait.

Tuesday evening Morgan stopped eating and drinking. Around 11 pm things got weird.  We were just about to go to bed for the night when I noticed Morgan’s tongue sticking out sideways.  Morgan’s tongue sticking out of his mouth from the side isn’t by itself unusual for him. When we first got Morgan his tongue routinely stuck out the side of his mouth. But that was because he was anxiety ridden. It took us some time to settle him down into our home and you all know what a joyful smile our boy Morgan has.

But this was different. This was Exorcist-sideways. I didn’t know what to do. I had never seen anything like this before. His tongue was firm and dry and sideways. Morgan continued to eat his food but now it kept falling out of his mouth. At this point I wasn’t so much troubled about this. Two days before the incident started the vet had told me he needed to lose a few pounds for his legs. I knew we could deal with this food issue later. I worried more about keeping him hydrated. I put a bowl of his water next to him. It seemed he wanted to drink but he just put his head down in the bowl and stopped. Like he didn’t know what to do.  I actually thought he might have had a stroke.

I’ve had a lot of experience with end of life moments and knew that water helped keep people (and pets) comfortable. I used a syringe to squirt water into Morgan’s throat. He didn’t like it at first, neither did I, but he let me do it. His tongue moistened and looked better. But it was still sideways. I lifted him off the bed and he went right for his bowl but he couldn’t get his tongue to lift out the water.

Suddenly, he turned and headed for the front door. Maybe he had to go, I thought. But instead he made a bee line for the giant fountain that we have in the yard. I lifted him up and he plopped his paws down into the basin and stuck his head into the flowing fountain and drank and drank. I exhaled! I knew that we would make it through the night. I knew then that I could keep him hydrated till the morning.

The relief was only momentary. He may have drank that night but the next morning the rock in his throat remained unchanged. His tongue still stuck out sideways. I was really only keeping him comfortable.  It was clear that the antibiotics were not working and that it had to be cancer.

I began to make arrangements. I couldn’t go through this alone. I told Cody’s Dad, Leo, and he agreed to drive me to the vet If I needed it. We’d both been through this before. I phoned James and we agreed Morgan couldn’t suffer. James decided to come home a day early.  I texted Rocky’s dads. They had been there for me before. They knew Angel Nicholas and Angel Willy. They reminded me that the most important thing for Morgan was love. I texted my brother who would inform my mother when it happened. Just like he did twice previously. And I contacted my friend Felix who also knew all my Goldens.

I don’t know whether it was fatigue that brought up these emotions. Or a hard-cold look at the facts. But I felt shell shocked. How could this have happened so suddenly. I had just bought our ticket to the East Coast to hang out on Cape Cod. We’d gone on four hikes in the last ten days. Now I was planning his death. My composure began to break. I even put some of Morgan’s toys in a box to give away. I didn’t want to do this afterwards. I knew that I couldn’t prolong Morgan’s time with me for my sake. I would have to find a way to get through it.

That afternoon I went to the vet to make plans to keep Morgan comfortable until James could get home. I was hoping Dr. Carter would come to the house to help us when we said good-bye. Above all else I had to be there for Morgan. I couldn’t get weepy-eyed and out of control.  Dr. Carter took one look at my face and asked, “What happened?”  I pointed to Morgan’s tongue. He turned to his nurse and ordered him to bring Morgan to the back immediately. “I need to sedate him. Is that ok?”

“Of course,” I replied. “Whatever you have to do.” Dr. Carter did the surgery on Morgan’s second leg years ago. He takes good care of our boy. Shortly afterwards I was called to join them in the operating room. He wanted me to see Morgan’s mouth. It looked like Morgan had two tongues.

He asked if he could use a syringe and draw out whatever was inside the lump. Again, I agreed. Blood and pus filled the tube.

“This isn’t cancer. This is an infection. I think he’s going to get through this.”

I exhaled deeper. I felt tears running uncontrollably down my cheek. Later, when Dr. Carter came out to talk to me in the waiting room he said he thought Morgan had swallowed a scorpion.

“A scorpion!” I exclaimed, shaking my head. To myself I thought, we worry about sharks in the water on Cape Cod. We watch for snakes and coyotes on the trails.  And he goes and eats a scorpion!

I texted my friends to let them know the crisis had passed. By ten that night he was eating and drinking on his own. Sleep felt good. After a few days Morgan’s smile returned. He had a spring to his walk again. It’ll be a few more days, and another checkup, before we‘re out on the trails again. I hear Cody is really missing his friend. Our pets live for such a short time. Don’t miss a moment to love them.

To Hell And Back

And the Oscar goes to….Morgan!
Scroll to top