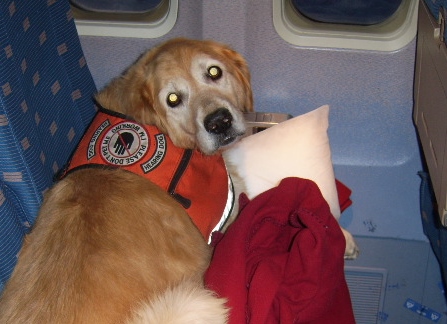 Back in the 90’s, I began to have serious sinus infections that punctured my ears drums and soon I lost most of my hearing. At that time I was living alone in a house in a forest of Redwood trees above the Russian River.  If the phone rang I couldn’t hear it. If someone came to the door I didn’t know it. But soon Nicholas, my first Golden, would come sit by my side. At first I thought he was coming for a head rub but then I realized every time he sat next to me and nudged me there was someone at the door.

With the loss of hearing, taking my daily walk around the hill in my neighborhood became dangerous as cars came up from behind me without my knowing it. I learned to watch Nicholas more closely. When his ears would go back I knew something was there. Night time, alone in the house, began to frighten me. Not only could I not hear but in the dark I couldn’t see as well. Some nights my paranoia took hold and I would imagine hearing noises outside the house. But then I learned to trust Nicholas’ attention and he was always right.

My second Golden, Willy, who I got when Nicholas was 13, caught on quickly and soon assumed Nicholas’ duties. I’ve always wondered if perhaps Nicholas trained him.

Then, a friend highly knowledgeable in disability laws suggested that I make Willy’s job official. So with a doctor’s letter, I got Willy tagged as an assistance dog from the County animal control. Now I could take him anywhere: in restaurants and shops, on planes and buses. It changed my life for the better. Some readers may remember the story when Willy saved my house from burning down. Here’s a link to that story in case you missed it: https://www.thedodo.com/community/rescuedbygoldens/willy-saves-our-home-from-burn-402047651.html

Now there’s Morgan, my rescue. Although it took some time to reverse his inappropriate behavior, we trained diligently for nearly two years and now he, too, looks out for me. He comes and gets me when someone is at the door or the smoke alarm goes off. He warns me about cars, even pulling me away from them.

Labor Day is a day to honor workers. I want to honor all of our canine working companions. Please share a story about how your dogs have served you or your family. Happy Labor Day Weekend.

What I Did On My Summer Vacation
Scroll to top