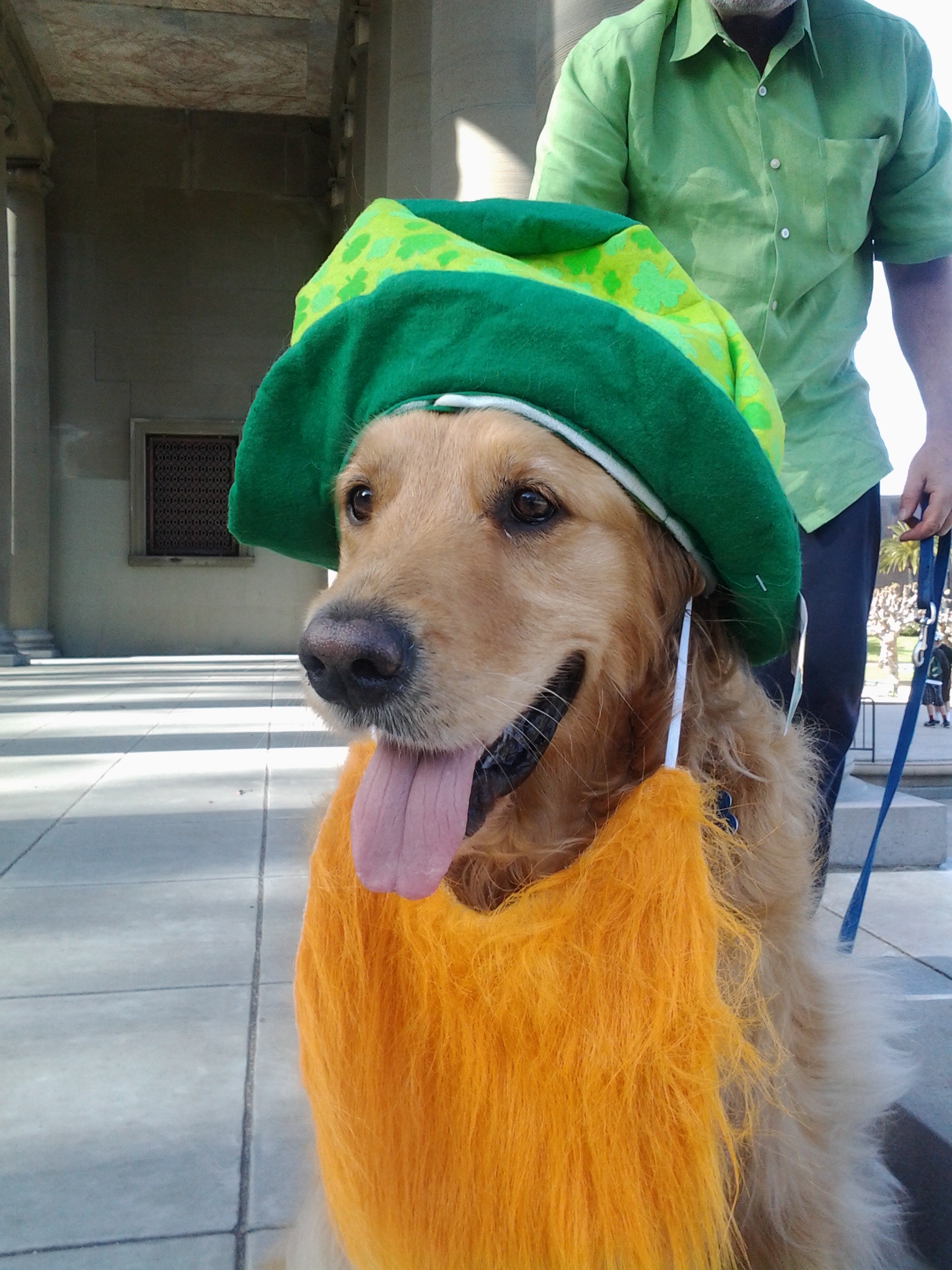 Top of the morning everyone. We’re in San Francisco, a city with a rich Irish history and a city fond of Golden Retrievers. According to the American Kennel Club, in 2013, Golden Retrievers were the second most popular dog in SF. Being surrounded by water on three sides gives it year round cool weather and makes it a haven for this breed. Morgan’s favorite place is the dog beach at Crissy Field. That’s where we plan to go just as soon as we finish breakfast.

You might be wondering why I named Morgan – Morgan Mallard McGullicuddy? First, we liked the name Morgan. Then Mallard is a gentleman pirate and the leader of the pirates known as Mos Le’Harmless. He was a kind and generous pirate despite his profession. We felt like Morgan was this way when we first got him. Lastly, when I was a kid growing up in South Boston there was a McGullicuddy’s Drug Store that we always stopped at on the way to the beach in the summer or the skating rink in winter. McGullicuddy is an old Irish name. (My Irish surname is Flaherty.)

This beautiful sunny morning we’ll start with some Barry’s Irish Breakfast tea and some Soda Bread smothered with Kerrygold Irish butter. Morgan will get a little nibble of the bread. Then we’ll take a short walk around the Eureka Valley neighborhood where our hotel is located. It’s one of the old Irish neighborhoods. Then we’ll have some McCann’s Instant Steel Cut Irish Oats. Morgan likes it mixed in with his food. While I was at the store searching for my McCann’s oatmeal, I came across a new brand called Flahavan’s Irish Steel Cut Oatmeal which I plan to try soon. Then while online looking to compare the two Irish brands I came upon another company called Kilbeggan Organic Porridge Oatlets. I love trying new foods and I’m sure Morgan will enjoy them too.

Later, after Morgan gets a swim at Crissy Beach we’ll head over to Patrick and Buffy Maguire’s coffee shop called Java Beach Café which is just around the corner from the United Irish Cultural Center of SF (UICC). Java has the best blueberry pie in SF. Morgan will get one of his Bully Sticks, his version of a mini Irish shillelagh.

I’m not a big fan of corned beef and cabbage but if I find any throughout the day I will give Morgan a little taste. I‘ll be passing on the Irish beers and liqueurs, as well. Did enough of that in my younger days.

Morgan and I wish you and your favorite companion a Happy St. Paddy’s Day.