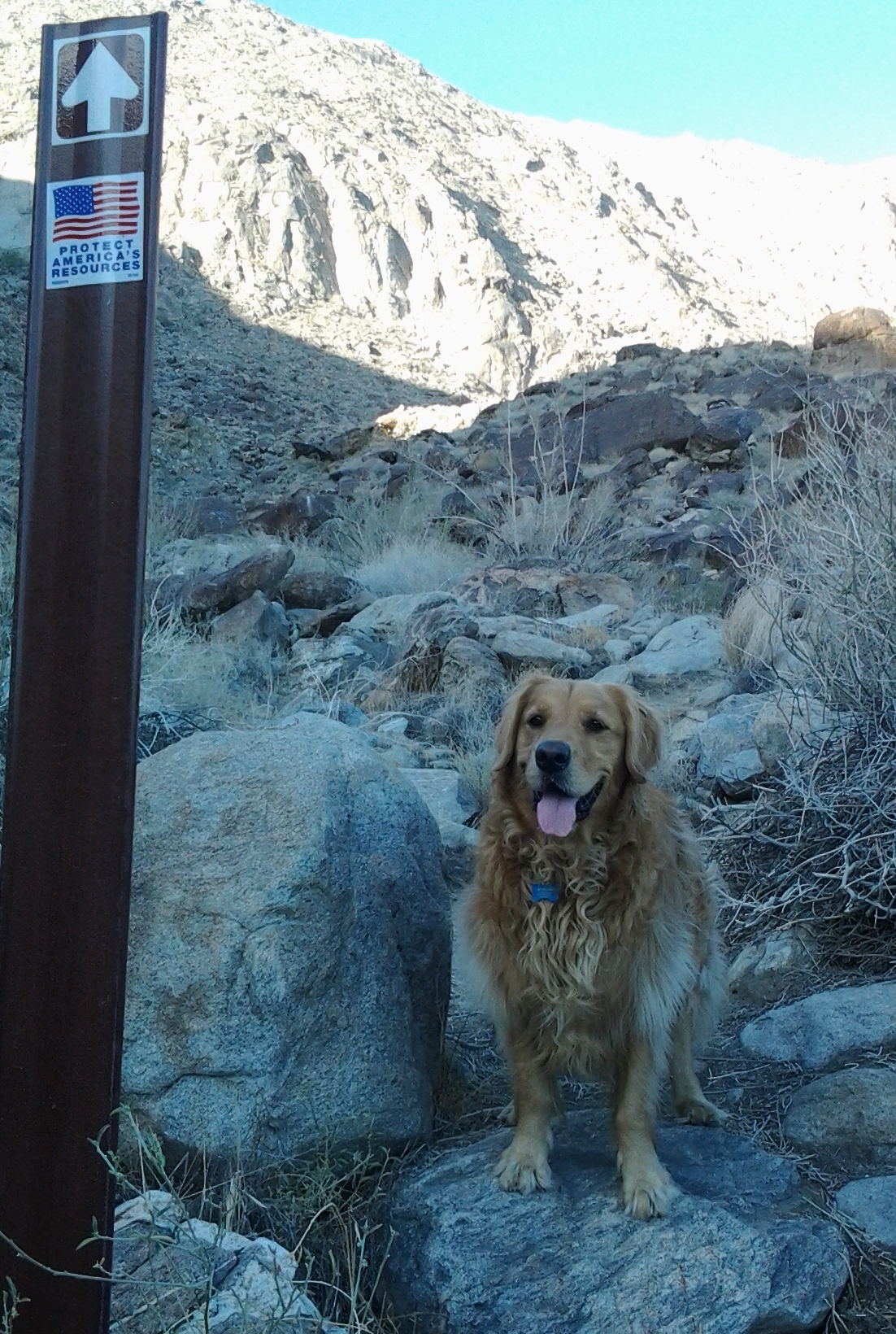 The mountains surrounding Palm Springs are lined with trails of all levels of difficulty and length. If you’re looking for lush green mountains like in The Sound of Music it isn’t in the desert. These hills are treacherous. It’s recommended not to go it alone. The path is narrow and often a steep grade either up or down. Both directions present unique challenges. Going up is more difficult for stamina and breathing but coming down takes a toll on your ankles and knees.

Part of the attraction is its danger and raw beauty. The San Jacinto Mountains are 10,000 feet high. You feel like a tiny speck. It’s humbling. The rugged outcroppings and steep grades make it a true adventure.

I’ve been hiking these trails with my dogs since I moved here in 2004. First with Willy,

my second Golden and now with Morgan. Hiking on these trails takes precaution. WATER is the most critical, crucial resource. I always bring more than I need. You never know what’s going to happen –how your body is going to respond to wind, the dryness, a change in temperature and even an accidental spill of the water bottle. You don’t want to be up there without WATER. Hiking in the desert isn’t like hiking other places where there are streams and rivers or lakes. Therefore you must also bring plenty of water for your canine companion. His body reacts the same way. He could just as easily get dehydrated. I always keep a close eye on my dogs. His thirst usually happens before mine. But I always let him decide whether he’s ready for water or not. We sometimes even pour a little on Morgan’s nose.

Next is FOOD or at least a snack. You need to keep yourself nourished. Make sure it’s not salty. Fruit is always a good option. Trail mix is a good alternative. We sometimes even make an old staple that many of us had as kids – peanut butter and jelly sandwiches. I never forget a treat for Morgan. Even if you don’t feed your dog human food or table scraps you’ve got bring something for him. This is a lot of activity for man and canine as well. We sometimes bring Morgan a bowl of his food and fill it with plenty of water so he drinks too.

It took me a while before I got the right balance of water. When I first moved here I sometimes didn’t bring enough and had to shorten the hike and then there were times I brought too much and it was heavy to carry in the knapsack. The good thing about carrying too much is that at some point you can pour a little onto a thirsty cactus.

We also carry tweezers with us all the time. Just in case Morgan steps into something. Those desert plants have some mean thorns and stickers that literally jump out and stick to you as you pass by. And with all the Golden fur it’s easy to happen. You don’t want to pull anything off with your bare hand. Some people brings gloves but I’ve found that tweezers are enough.

As a further precaution I’d suggest you bring bandage and gauze. This rocky terrain is slippery and accidents can happen to you or the dog. You don’t want to be up there with your leg bleeding. Or your dogs. And you don’t want to have to come home early on a spectacular hike. These are things that I always carry when I leave the house for any length of time. It’s not just here in the desert. Willy cut his paw once in the ocean in Maine and I was relieved that I had all the supplies needed to properly and safely bandage his leg. I even taped an old sock around it so he couldn’t pick at it. There’s a photo of him on the web site with the sock.

Not to dampen the spirit of adventure it’s important to know about snakes. Here in the desert we have some venomous snakes that prefer not to come into contact with humans or canines but occasionally slither onto the trail to warm themselves in the winter sun. There have been several reported incidents where dogs have been injured by snakes. We’ve actually given Morgan a snake-aversion class. I don’t recommend this for the faint of heart. The trainers come to your house with live rattle snakes and an electric collar for the dog.

When Morgan got close to the snakes he was zapped and yelped and jumped back. In the final test, without the electric collar, when he saw the rattler this time he ran in the opposite direction. Though in general, I oppose the use of this device for training, I believe that Morgan will never go near a snake again and that could save his life!

Here’s a link to the ASPCA site about pet safety and snakes: http://pets.webmd.com/snake-bite-safety-prevention-pet