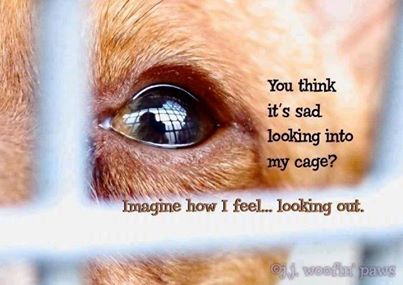 Palm Springs has had a new dog shelter for about two years now. The old one was built in the 60’s and it was long overdue. I had visited the old shelter once when I was asked to write a column for the local newspaper about a fundraising event for a new shelter. It broke my heart just for its deplorable condition. The new shelter is state for the art and a tribute to our love for animal-kind. Right now there’s an ongoing matching fund campaign and I’d been wanting to make a donation to honor my three life companions.  A friend of mine who works for the shelter offered to meet me there and take my check. I’d been there once before for their grand opening and it broke my heart again to see so many dogs in the pens. On this day I refused to see the dogs, I just couldn’t take it. This time I was heartbroken by the number of cats at the shelter. By chance I happened to walk by the canine section and there were the dogs, mostly pit bulls, staring up at me. Now I know why a friend of mine adopted his second pit bull. How could he not?  Their big sad eyes looking out. Photo found on the Facebook site from Army of the Kind by j. j. woof ‘n’ paws.

Preparing your Pet for Travel

Dogs Bring Us Together
Scroll to top #top-ten{color:white!important;)