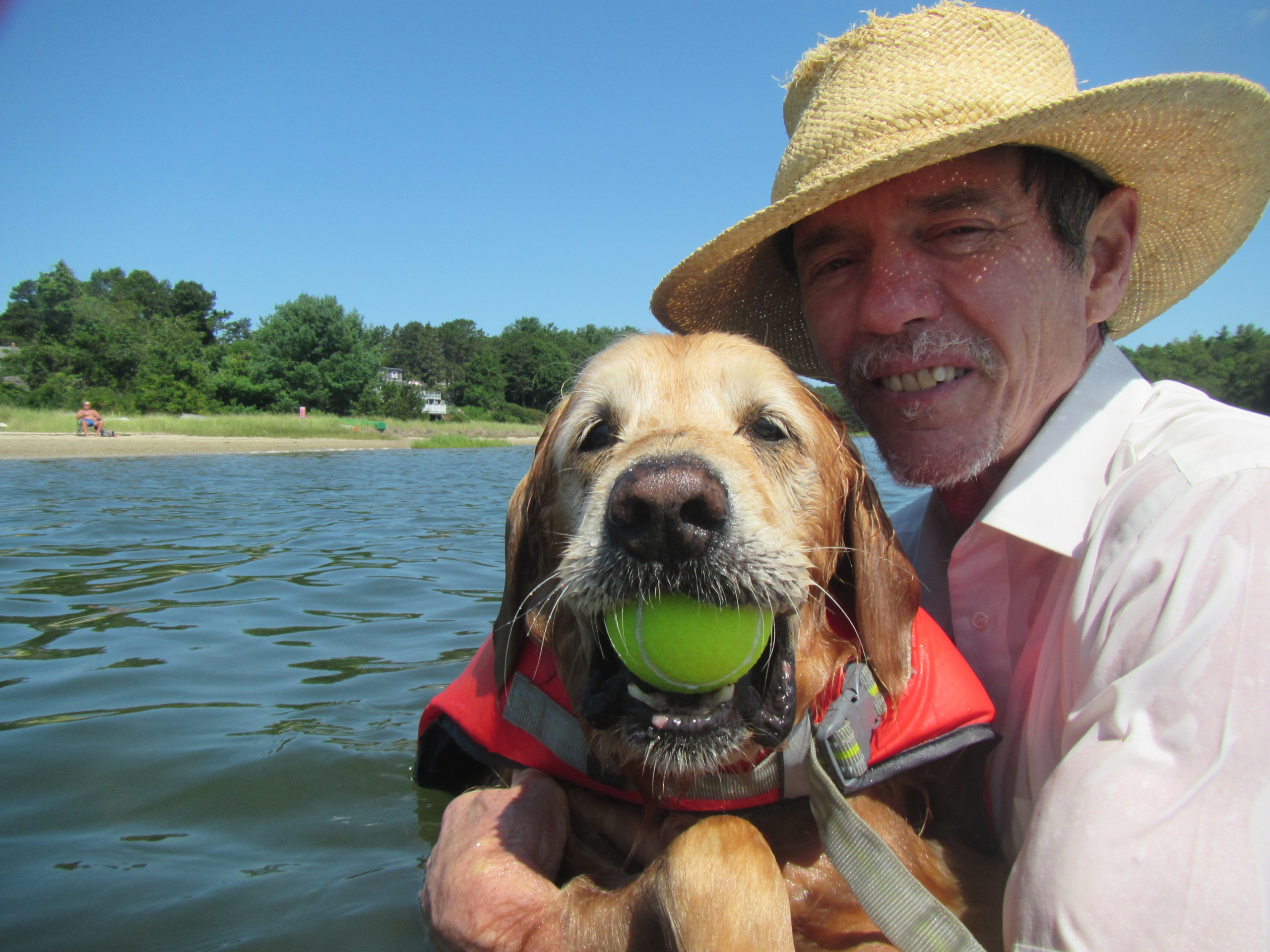 Many of our friends may have heard about our successful book signing at Edgartown Books on Martha’s Vineyard. What you may not know is that I was a complete nervous wreck. It was my first book signing and I could barely write my name. In contrast, Morgan lay on the ground next to me, totally relaxed, with a big goofy smile. People walking down the street couldn’t resist him. I was afraid that no one would show up to buy the book, despite the fact that it was featured in two newspapers and the local radio station.  But as it turned out the best advertising was a smiling Golden Retriever, named Morgan. The line that formed to pet him, turned into the line to buy the book.

Whenever my nerves got the better of me, I would lean down and rub his head and the jitters in my fingers dissipated. For those who have read the excerpt from the book, you know that Morgan has not always been a source of tranquility. He was a swirling dervish of energy when we first rescued him. He was aggressive with other dogs and around his food. One of the things that calmed him to help him sleep was to rub his head gently. In those days I never imagined that he would ever be a source of calm for me. Or that he would become my assistance hearing dog.

But after a two-year, rigorous training course with a police-canine officer/instructor he’d come get me if someone was at the door. On our walks he alerted me to cars and people approaching from behind me. One night he stopped in the middle of the street for no apparent reason.  Then suddenly I saw two coyotes jump over a wall up ahead of us. Even though he is unable to walk now, in his senior years, he continues to assist me.

Just last week, from my bedroom, I heard him barking loudly and incessantly. Suddenly I smelled smoke in the air and rushed out into the kitchen, where he was lying, to find bellows of smoke pouring out of the microwave. I threw open the door to find a charred sweet potato. Thanks to our houseguest! Gratefully, I patted Morgan on his head and rewarded him with his favorite treat – a banana.

It’s impossible for me to believe that we just celebrated Morgan’s 14th Gotcha Day and that we’re back swimming together again. This has given us renewed quality time with Morgan which I pray will continue for as long as possible. Our boy may be 14 but in our hearts he’s still that year old, crazy boy, who jumped into my truck when we rescued him all those many years ago.

How I Learned About Love

A Mended Heart
Scroll to top