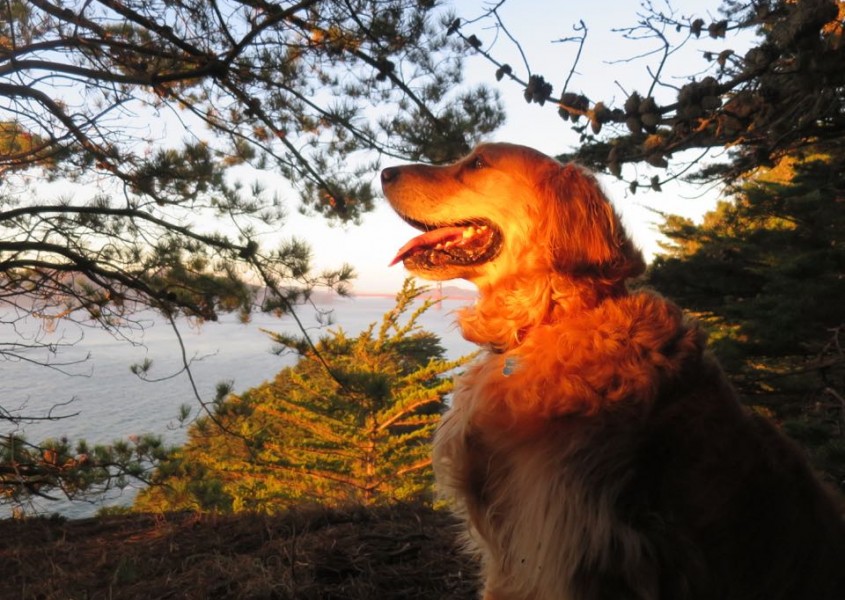 Dogs serve humans in so many ways. We are all aware of the usual things that our canine companions do for us. They comfort us and keep us company through good times and hard times. But on occasion there are extraordinary circumstances where dogs come through. You may have recently read about a King Shepard up in British Columbia, named Sako who protected the survivor of a car crash.  Sako kept his owner warm, preventing life-threatening shock from the injuries and kept coyotes at bay.

In my own life dogs have been invaluable. Back in the mid-nineties I experienced ongoing sinus infections as a result of HIV. The infections spread to my ear canals. During these episodic health crises I literally became deaf. I couldn’t hear the familiar hum of the refrigerator or the sound of the birds in the garden. I could no longer talk on the phone to friends or hear the knock of someone at the door. It became dangerous to walk Nicholas, my first Golden, around the hill for his exercise. I remember the day I was shaken when a car behind me suddenly sped by treacherously close to us. I had seen Nicholas turn his head, but had not given it any thought. From that time on, I learned to watch Nicholas for his every movement. He became my own private radar-system. He monitored the area around me. He’d let me know of approaches. Now, when walking on the road, if he turned and looked in a certain direction, I knew something was there. I became even more in tune with him, noticing the slight shift of his ears, the squint of his eyes and the speed of his walk.

In the evenings when it became very dark and I was unable to hear anything I became frightened. Several times I imagined that I heard voices and noises in the yard. I would get up and check to make sure the doors and windows were locked. At first I was afraid to shut the lights off at bedtime and slept with them on, with Nicholas in bed with me. I prefer it very dark when I sleep so I didn’t sleep soundly in the beginning. Eventually, I learned to trust Nicholas’s behavior and became more at ease. If he didn’t seem disturbed, I knew it was my paranoia and finally I felt safe enough to shut the lights off again.

One day while I was in the upper garden, Nicholas came to my side and sat staring at me intently. “What do you want?” I asked him, like you might a young child. I turned and to my surprise I saw a friend standing below at our front door. Eventually it dawned on me that he did this behavior whenever someone came to the house. He came to get me when the phone rang. If I was out in the yard and a car parked in front of the house he’d hunt me down. Without any training, Nicholas became my first assistance dog, whether or not he had an official badge or an orange vest. During this era, I had so many infections that my ear drums were permanently damaged with little hope of repair. So even when HIV meds arrived and my T-cell count and general health improved, my hearing did not benefit. I am still classified as hearing-impaired.

When Willy, my second Golden, quickly took over this job from Nicholas I got him officially tagged as a hearing assistance dog from the Sonoma County Animal Control. With this license I was able to take him into restaurants and even on the plane. It changed my life.

Once Willy even saved my house from burning down when I wasn’t paying attention to the eggs frying on the stove. Being a writer I spend a lot of time at my computer and often lose track of time. Willy came into the bedroom where I was working and nudged my leg. I knew immediately that something was amiss in the kitchen. Sure enough flames were shooting up from the stove. I quickly grabbed the handle of the pan and carried it through the back porch and out into the yard. With the disaster over and the kitchen still smoky, I went back to my computer but suddenly Willy was by my side again. This time I saw flames in the back porch. Apparently grease sparks had flown out of the pan and into a bucket of cleaning rags and set them on fire.  I dragged the table the bucket sat on out into the yard. This time there was actually damage to the house. The porch windows were cracked and the white ceiling was stained black. I put a big sign on the stove reminding me to never leave it while I was cooking.  I took a few minutes to thank my house-saving companion.

My newest hearing dog is Morgan. Although I have given him no opportunity to save the house and I’ve overcome my paranoia of the dark, I am still dependent on the turn of his head on our daily walks, his beckoning when someone is at the door and most of all for his wide grin that greets me when I first open my eyes in the morning.