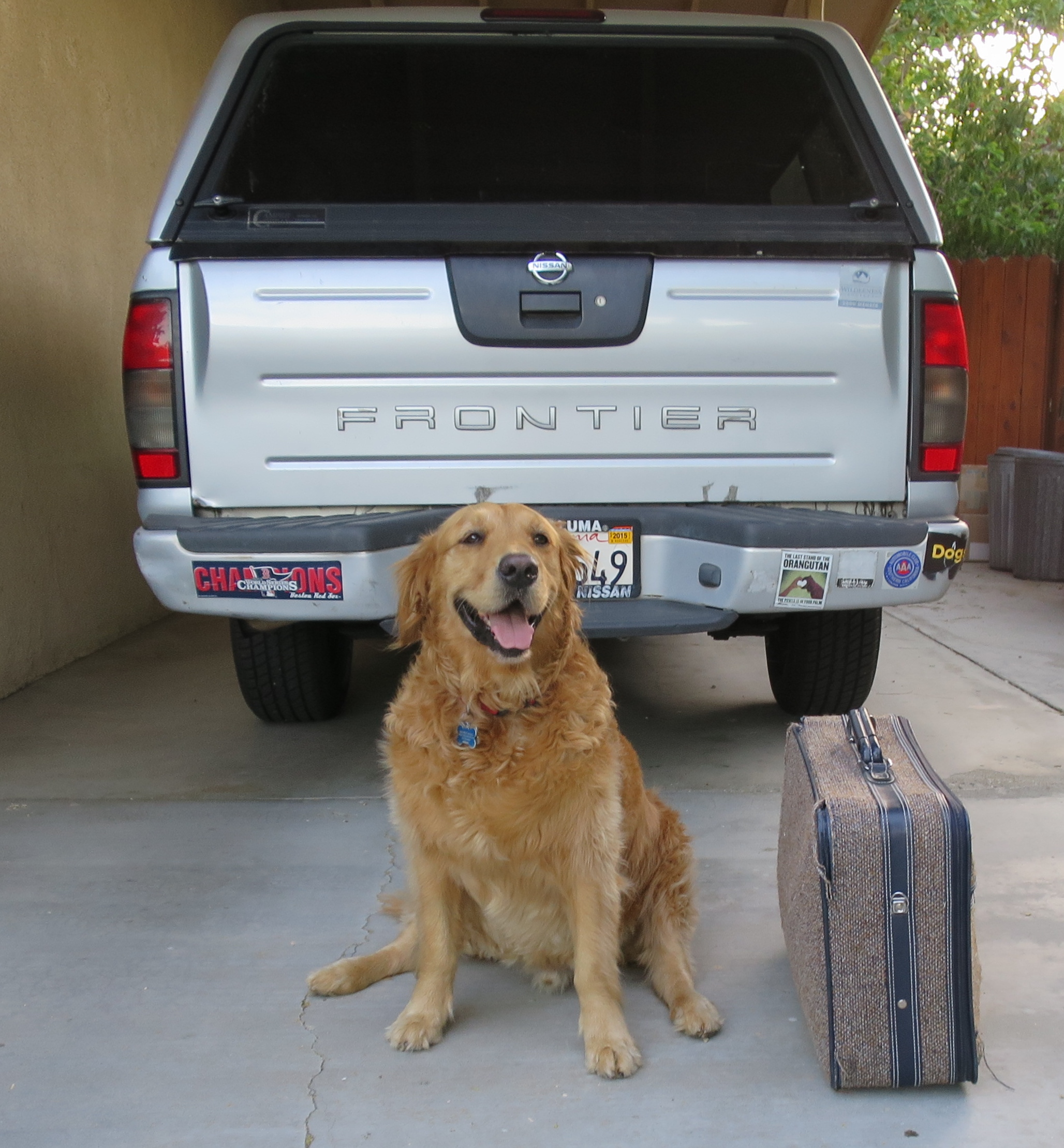 It’s June and the weather is heating up – well it’s been hot here in Palm Springs for some time but I know for the rest of the country it’s been a cold long winter. But as the Beatles sang – “Here Comes the Sun.” We’ve been planning our summer vacation for months. We’re heading up to cool foggy San Francisco. It’s great place for Golden Retrievers. Besides the usual planning and preparation when you have a pet there are additional considerations.

First is a check-up from the vet. We don’t want to start the trip out on the wrong four legs. Today I made sure that all of Morgan’s shots were current. It’s important with a retriever to make sure his or her ears are clean and clear. With the amount of water Morgan gets into that’s always a concern. And of course his eyes. Here in the dry desert heat and with chlorinated pools that’s always a body part that needs diligence. I always make sure I carry his eye lubricant and eye drops.

Besides my own medication I also need to make sure I have ample supplies of Morgan’s. Due to Morgan’s back leg injuries, he has early arthritis, so I always carry his pain medication for an as needed basis. As you might know from following Morgan’s Facebook page he’s quite active and my approach is to let him keep going for as long as possible. However, some days we both overdue it. I know from my own experience that with body pain, it’s important to get a good night’s sleep, so I keep a supply of Morgan’s pain meds around. It settles Morgan down nicely for the night without causing grogginess the next morning. And then he’s ready to go again.

We will be spending July 4th in San Francisco. The loft we stay at is close to the Bay where they set off the fireworks celebration. As many pet owners have experienced, this is a traumatic time for animals. And sometimes it doesn’t end on the holiday. A few years ago when we were on Cape Cod the neighbors up the street lit fireworks for the following two weekends. It was hell. Also, the loft that we stay at in San Francisco is located near the Giants ball park and whenever they win the set off fireworks. Last year, fortunately for Morgan’s sake, they didn’t win too many games but this year they’re in first place.

Another time, we were at a motel in San Francisco and there was a loud banging coming from a construction site next door. The wind was causing something to bang on the roof. In this particular instance I had run out of his meds and I called the vet and asked what I should do. He suggested Benadryl. It worked pretty well. Eventually Morgan slipped off to sleep.  I don’t suggest you give your pet Benadryl – I suggest that you talk to your vet about this possible option.

I know that many readers live in parts of the country that gets severe thunderstorms in the summer and this gets the pets nervous, too.

I keep Morgan’s fur really short for the summer for three reasons. First and obviously is that after he’s been swimming in the bay and rolling in the sand it’s easier to clean him up. Second, out here in the dry West during the summer there’s lots of fox tails to be stepped on and run through. Foxtails are the spiked like seeds of the wild grasses here and can get into a dog’s paws, ears, eyes, anywhere really and can be very painful. Having a summer clip makes it easier for me to keep an eye on his paws and anywhere else one might lodge itself. Like his ears. What I do ahead of time is practice running my fingers in between Morgan’s toes so he gets used to the feeling. I remember when I first got Morgan he refused to let me touch him in this manner. Now he likes it. I can tell. If we’re out on a hike and he steps on something he stops immediately and lifts his paw and waits for me to remove it. It’s so touching.

And lastly, as many of you are aware there is a growing outbreak of Lyme’s Disease, particularly in the northeast. I can speak from firsthand experience. Even after inspecting my previous Golden, Willy, every evening for ticks somehow he came down with Lyme’s disease. It was frightening. One of the main symptoms is lameness. Willy just wouldn’t get up from the shady spot he was in. If you see this behavior rush your dog to the vet.

Wherever we travel I always go online ahead of time and look for a pet store that carries Morgan’s brand of food. Traveling isn’t the time for switching. In San Francisco I was lucky to find a store just three blocks away from the loft. I also bring Morgan’s blanket and some toys with us to make him feel more at home. Even if he never touches them once we’re there.

I would love to hear how about some of the ways that you prepare to take your pet on vacation with you.

Come Back as a Golden Retriever

Hot Cats On a Bun
Scroll to top