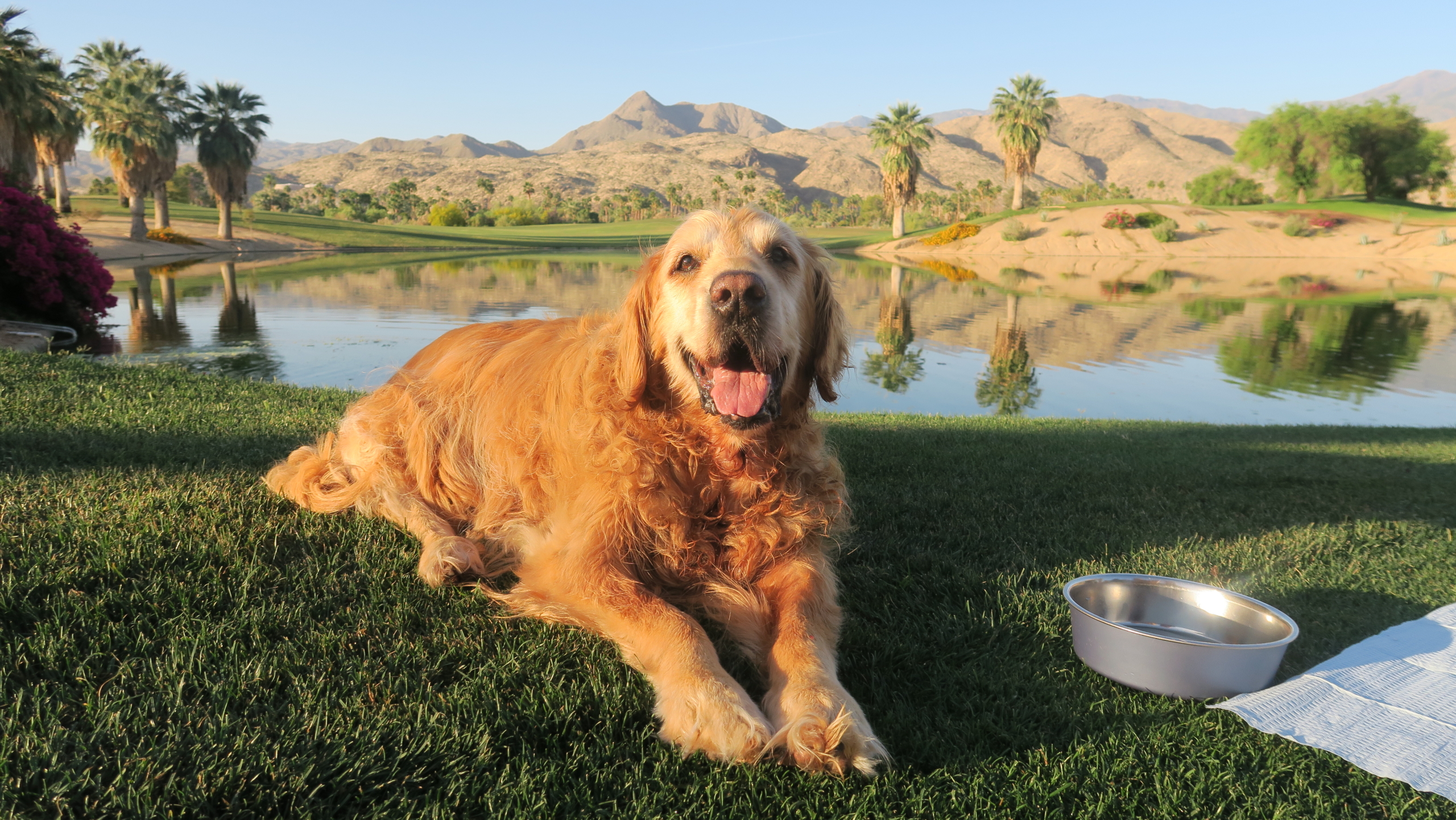 My heart is still fractured from the recent loss of Morgan, my faithful Golden service dog. We had been inseparable the last 13 ½ years. He passed away quietly in his sleep next to me in bed.

My brain is filled with thoughts of Morgan every day and our unimaginably epic life together. Now, I can only tell him he’s the “prettiest boy in the world” in my heart. I can only see his smile in my mind. I can’t run my hands through is curly fur while I say those words. The fact that those days are over brings me immeasurable sorrow.

Right now I feel like Morgan was the greatest of my three dogs. But truthfully, he wasn’t. But this by no means lessens his importance. It’s just that time causes you (me) to forget the details of my first two Golden Angels.

I remember how devastated I was when my first Golden, Nicholas, crossed over. I truly believe that his love and devotion saved my life. He was the one sure thing when my partner got sick and died of AIDS. He was the reason to get up in the morning. He was my crutch. Having him in bed with me and my arm around his shoulder got me through lonely and painful nights. I was lucky (blessed) to have him in my life.

It was a good thing I had Willy, my second Golden, when Nicholas passed. I wouldn’t have made it through the loss of Nicholas without him. Not on top of so many other losses. Not on top of my own declining health.  If I hadn’t of had Willy, I truly would have been alone.

But Willy wasn’t like Nicholas. He never tolerated being on the bed, never mind sleeping in the bed. He was a wanderer. This was a being who had too much love to share with other people to be confined by the fence I put up around the property.

Willy had a girlfriend on the road above my house. Some afternoons my neighbor would telephone me and say, “He’s up here. Come up when you want him.”  Once, security at the Bohemian Grove, an exclusive men’s encampment in the redwoods, where world leaders gather every summer, such as both Bushs, Schultz, Kissenger, and Ford, phoned and asked me if I had a Golden Retriever named Willy. When I said yes, he told me I had better come and get him. He was in their dumpster. I got an armed escort into the main grounds where I found Willy eating their leftovers. The staff stood around laughing.  They told me he could come back anytime he wanted to. AND HE DID!!! Now the caller said, “He’s back.” That was the problem. Everybody loved his visits.

Around this time, AIDS treatment improved. There were prophylactics for some of the opportunistic diseases. There were three HIV drugs to choose from that stopped the virus. The disease became manageable, but not over.

With dying on hold and living a possibility, it was time to reevaluate my life. I know in my mind and heart that the only reason I was able to sell my house in the redwoods and move to Palm Springs was because of Willy’s guidance. Our afternoon talks gave me confidence that we could do it.  If you’ve read A Golden Retriever & His Two Dads, you know that Willy introduced me to James, my life partner.

When Willy died of congestive heart failure at 11, I was distraught. He died too soon. For the first time in twenty-five years the house was empty, dog-less. Grief never really goes away, you just learn how to live with it. I thought I had. I discovered quickly, I hadn’t learned how to cope without a dog. My thoughts were scrambled, my heart was ripped apart. I relived the AIDS epidemic. I relived Nicholas’ death. I couldn’t leave Willy’s gravesite.

It took five months before Morgan jumped into the truck and it seemed like five years. Despite Morgan’s behavior problems my heart healed. I learned to love again. As did Morgan. He changed my life. He was aggressive to other dogs. To keep him safe we took off for our adventures at 5 am. This may seem extreme. But it actually worked well. In Palm Springs, you have to go out before sunrise, anyway. To see the sun rise against the mountains was exquisite. To have the trail all to ourselves was not only a relief, but magical. Morgan became such a ham. He loved posing. He loved the attention. He wore hats and antlers and glasses. We referred to him as “The Talent.” We especially loved when he was finished and just walked off the set. We called these photo ops, “And he’s done!”

Morgan represented our life in Palm Springs. Our travels out of the heat. Summers on Cape Cod. He represents our time sheltering from COVID in the desert. We had the town to ourselves. Wagon-walks along the golf course. Against all odds, he made it across the country with us to our new home in Buzzards Bay. We buried him here in our back yard. We didn’t leave him behind. We worried so much we might have to.

When Morgan died in bed next to me, it took me a couple of days before the tears flowed. I was so exhausted and relieved that we didn’t have to lift him and carry him any longer.  For the last two years of his life he couldn’t walk. I know he felt the same way. Those final days he stared at me with glassy eyes. I knew he was ready. He was tired as well.  But once I rested up a bit and got a full night’s sleep, the realization he was never coming back crept in, and grief hit me.  All the things we would never do again.

I’ve now done this three times and each loss was different. Each Golden brought their uniqueness to the relationship. I’m not the same person I was with Nicholas, or Willy or Morgan.  I think, because of my history, mending my heart takes more time than most people.

Now we have a rescued, 95 pound, giant Golden, named Franklin. He’s big in a lot of ways. Big head. Big personality. And most importantly, a big heart. That’s what has won us over. Morgan’s passing is still recent and raw, but Franklin is helping my heart to mend and to open again.  I leave you with this poem I discovered:

It came to me

I lose a dog

they take a piece

Of my heart with them,

And every new dog

who comes into my life

gifts me with a piece

If I live long enough

will be dog, and

loving as they are. – Anonymous