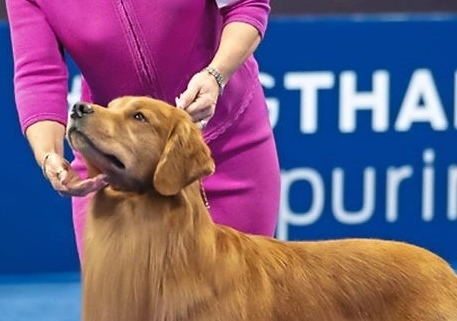 It’s incomprehensible that a Golden Retriever has never won Best in Show in the 143 year history of the Westminster Dog Show.  That’s improbable. The odds of this happening is greater than the odds of me winning the lottery and I don’t play the lottery. If you watched this year’s competition you learned that a Golden Retriever specimen like Daniel doesn’t come around that often. And almost never makes it to the semifinals to compete for Best in Show.

This year’s Best in Show was won by Siba, a Standard Poodle. I got nothing against Standard Poodles. I know them to be highly intelligent non-human persons. I got nothing against clipping a dog. I clipped my Golden, Morgan, in the summer (not as severe as Siba). It was just a trim and I still got some unpleasant comments from other dog owners thrown my way. Which I didn’t like. No one should tell another person how to care for their companion. I don’t mind clipping a dog even to make it look as ridiculous as poor Siba. But I do have a problem with the Westminster Kennel Club allowing a dog to enter the contest “poofed out” like her. And I have an even bigger problem with a judge who chooses a dog coifed with a giant bouffant hair don’t over five other dogs flawlessly groomed like Vinny the Fox Terrier, Conrad the Shetland Sheepdog, Bono the Havanese, Wilma the Boxer, and my namesake, the handsome Daniel the Golden Retriever.

No offense to you Siba. I blame your human guardians. They did this to you. I also blame the AKC for allowing this in their contest. Maybe without that ornamental hair costume Siba would have won. But I doubt it. This is so blatantly biased and unfair to the remainder of the contestants.

I think the AKC ought to add a new category – The Best in Groomed – if that’s how they want to justify a haircut like Siba’s. I think the groomer ought to be the star along with the dog. Before the show someone one can ask Siba, “Siba, who does your hair?”

Something ought to be done. There ought to be a rule!!!! I felt so strongly about this that I wrote a complaint on the comments section of the AKC website.

I’m calling for all the fans of the breeds that lost to Siba to follow my action and send in a complaint. Maybe there was cheating like what’s going on in baseball right now. Maybe someone in the crowd was blackmailing the judge. Maybe a fan of one of the less popular breeds didn’t want the Golden to win. Afraid that this would make them even more obnoxiously popular.

I can understand the jealousy. After all, when you turn on your television any time of day who do you see starring in commercials? Golden Retrievers! They’re in car commercials (with the Labs), real estate, gardening, medications, baked beans, insurance, banking, and on and on.

But I can tell you one breed you rarely see in commercials – the Standard Poodle! You don’t see them selling cars or homes. No Siree. It’s the Golden Retriever! And with children – ok the Labs are in some commercials for children. But they’re not our nemesis!

All you have to do is walk into any hospital and see which breed is visiting patients and comforting relatives. It ain’t the Standard Poodle!

It’s been a week since this injustice has been perpetrated and I’m still upset. I’ve decided that sending a complaint to the AKC is not enough. Henceforth, I’m contacting my Congressperson, someone who I got to include animal welfare in his web site, to open a Congressional investigation into the AKC contest rules to see if there is some sort of redlining against America’s favorite breed. Rules that deem only a poofed out, stuffy and uptight breed, like Siba’s, can win Best in Show.

What’s your take on the results of the WDS?

Do You Let Your Dog in the Kitchen?
Scroll to top #top-ten{color:white!important;)