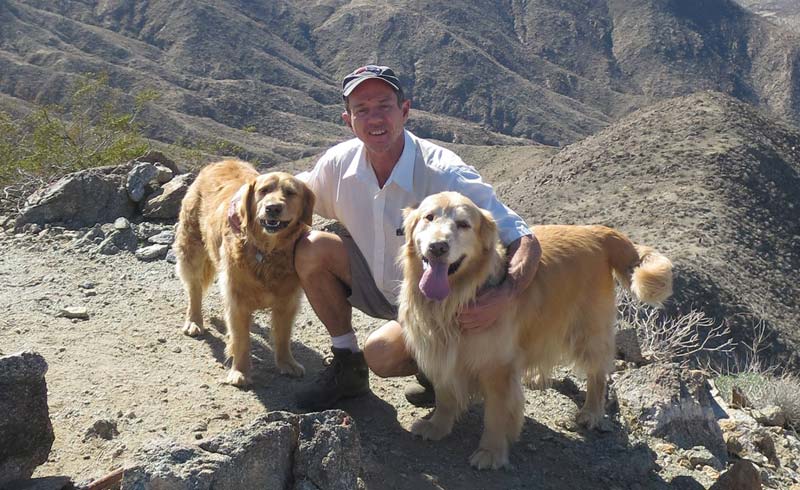 This past Sunday morning I took Morgan and his best friend Cody, both Golden Retrievers, on a hike. We started behind Von’s in Palm Springs and headed up the goat trails towards Murray Peak.The rugged outcroppings and steep grades make it a true adventure. This year with the January storms the peaks are capped with snow and are breathtaking. By all the tail wagging I could tell that even the canines could feel the wonder of it all.

However I was surprised to see several hikers that were not carrying water for themselves or their dogs. Hiking in the desert isn’t like hiking in other places where there are streams and rivers and lakes.

Therefore, even on a cool day, you’ve got to bring plenty of water for yourself and Fido. I always bring more than I need. You never know what’s going to happen, how your body is going to respond to the wind, the dryness, a change in temperature and even an accidental spill of the water bottle. You don’t want to be up there without water. I bring a quart of water for myself and one for each of the Goldens. Keep a close eye on your canine companion. He could just as easily get dehydrated. Their thirst usually happens before mine. But I always let them decide whether they’re ready for water or not.

You also need to keep yourself nourished. Make sure it’s not salty. Fruit is good. I like sliced apples. Trail mix is a good alternative. Sometimes I even make an old staple – a peanut butter and jelly sandwich. And of course, I never forget a treat for the dog. This is a lot of activity for humans and canines as well. I sometimes bring a half of cup of food each for Cody and Morgan and fill their bowls with plenty of water so that they drink too.

It’s important to pack tweezers just in case one of them steps on something. Desert plants have mean thorns and stickers that literally jump out and stick to you as you pass by. And with all the Golden fur it’s easy to happen. You don’t want to pull anything off of them with your bare hands. Some people bring gloves but I’ve found that tweezers are enough.

As a further precaution I bring bandage and gauze. The rocky terrain is slippery and accidents can happen to you or the dog. You don’t want to be up there with anyone’s leg or paw bleeding. Every year there are dramatic rescues of hikers in trouble.

Not to dampen the spirit of adventure, it’s important to know about snakes. Here in the desert we have some venomous ones. There have been incidents where dogs and humans have been bitten by them. Me and the dogs encountered one warming himself in the winter sun on the Lykken Trail. Fortunately they took a snake aversion class and stayed away. There’s a snake aversion class on February 28th at Demuth Park. Contact the VCA animal hospital in Palm Springs or Rancho Mirage for more information.

Happy trails to you and your dog.