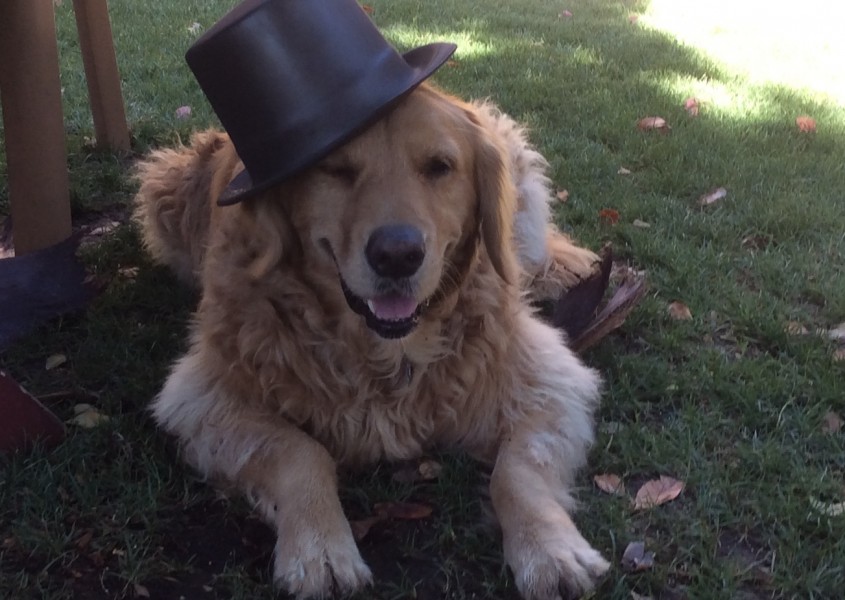 Over the years, I have had a sometimes great relationship and sometimes not so great relationship with my Father. Things are always great between us when I do exactly as he advises and not so great when I don’t take his advice. The same holds true for his relationship with my dogs. My first Golden, Nicholas, was trained and well behaved. He followed voice command with ease. When I visited Massachusetts my father walked him twice a day. “He’s no trouble at,” my father said each time I told him that he didn’t have to do it.

Then came Willy, wild and wonderful Willy, who I didn’t train in any class. Who I practiced lessons with sporadically and half-heartedly. Willy was famous for doing whatever he wanted to do, sometimes just dropping when I tried to get him to do something he didn’t want to do. “He does whatever he wants to do,” my father said exacerbated one night when he came home with my dog. What could I say? It was true. That’s what Willy did. I remember the time when we were on Cape Cod hiking around the neighborhood when we accidently came out to the beach road. Willy thought we were heading to the beach. He drove headstrong toward the water. Not a good assumption on his part. Willy dropped when he realized he was mistaken. I tried to convince him otherwise by telling him that we’d go later but he wouldn’t budge. A crowd of beach goers watched his performance, laughing at the spectacle. I admit I got a bit irritated at his antics at first, but then I laughed too. After all it was my fault. So I faked a give-in and when he rose to head for the ocean I reached down and lifted him up and carried him away to applause. Willy was horrified at being tricked.  Willy was famous for his games. He danced around whenever I called for him. I didn’t mind. I loved him and he brought joy to everyone he met – except my father. For me, Willy could do anything he wanted to until the orange cape was wrapped around him. And he did. He knew the time for his shenanigans was not then. On the plane it was as though he had been trained by an expert for years. At a restaurant, he sat and waited beneath the table. On a train or a boat. Perfect. That’s all that mattered to me regardless of what my father thought. I walked Willy when we visited my parents.

Now there’s Morgan – well-trained Morgan, and once again my father walks my dog twice a day. “He’s so well-behaved,” my father says. “That last dog did whatever he wanted to.” I just smile and shake my head. Dads are dads. They’ll never change and we love them anyway and are grateful to have them in our lives. Morgan and I wish all dads – dog dads and human dads – a Happy Father’s Day.