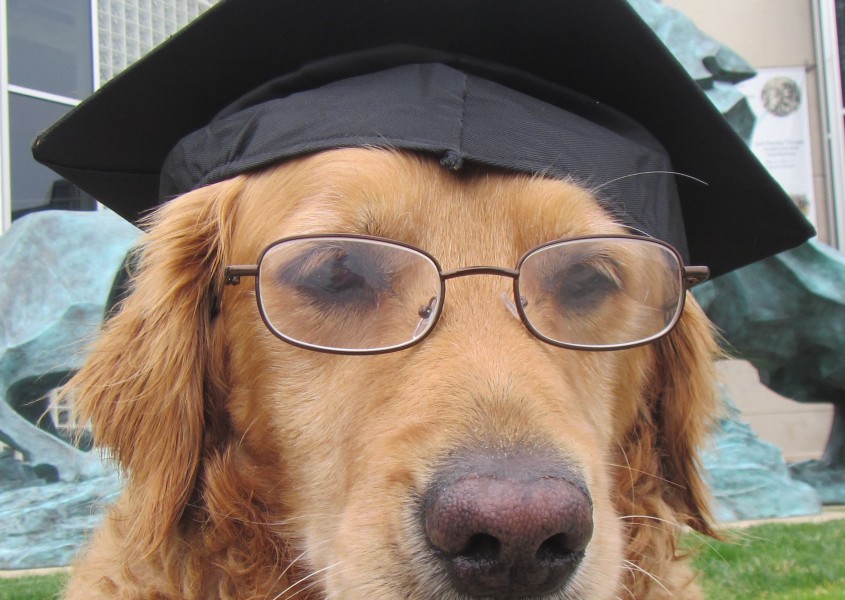 Last week I took Morgan to visit my alma mater, the University of San Francisco. It was a little shocking when I realized that it’s been 35 years since I graduated. It made me think about the importance of my education and the opportunities it opened for me as the first member of my South Boston working class family to graduate from college.

As I took photos of Morgan on campus with my old graduation cap atop his head I also thought about how important it was to train him, as well. As many of you know Morgan was turned into a dog shelter in South Central Los Angeles when he was just one year old. He was my first rescue and was in rough shape – undernourished and untrained, with no social skills. I could feel his rib cage when I first picked him up and put him in the back of the truck. I had no idea what I was getting into.

I had raised my previous Goldens, Nicholas and Willy, from puppyhood and their training was uneventful and fun. But with Morgan it was completely different. Within the first week with Morgan he bit me twice when feeding him. It was a real wakeup call that I needed help. This was definitely not going to be as easy as my first two dogs.  Since Morgan had no training as a puppy he had the social skills of an immature dog in an adult size body. First Morgan had to unlearn his bad habits of barking at every dog that walked by and also trusting that not only would he be fed at a regular time but that there would always be ample food for him.

But this was just the beginning. He also needed to bond to me. He had to constantly be leashed or he would just run off aimlessly. We found the perfect class sponsored by the Palm Springs Kennel Club. The instructor was a no-nonsense ex-cop who had trained police canines.  The drills were rigorous but I could see Morgan improving week to week as the lessons took effect. I know he liked them too because every week he would jump into the passenger seat of my truck afterwards and look over at me with a big grin on his face.  l’ll never forget the night he put his paw on my shoulder as we were driving home. After every class when we pulled into the driveway he would dash inside to the kitchen and await his dinner.

Morgan and I needed to repeat the course three times until he finally passed the obedience test. I was so proud on that graduation day when my boy was presented with an official score card declaring that he had earned his AKC Canine Good Citizen Certificate. (Posted below)

Morgan sends congratulations to all two and four-legged June grads.

Happy Father’s Day to all Dads
Scroll to top #top-ten{color:white!important;)