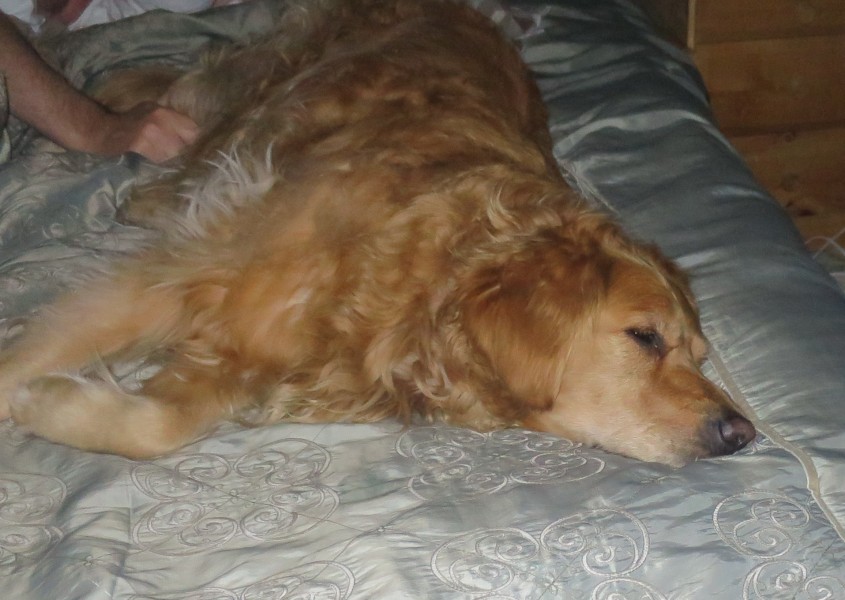 In our home, the last thing we do in the evening is turn on the dishwasher. Eventually, Morgan learned that when the dishwasher door closed we headed to the bedroom. Now he races ahead of us. It’s so sweet.

Of course we let him up on the bed for a while. It’s cozy and we just love having him with us. But as Morgan relaxes he seems to spread out in all directions and our Queen Size bed isn’t big enough for three big bodies. Is there any doubt that we adjust? Then as Morgan falls deeper into sleep he often starts making noises. There’s these little trilling growls, followed by a high pitched yelps and then sometime even barks.

My other dogs did this too. But when we first got Morgan he didn’t make these sounds and I think it was because he wasn’t really home yet. Maybe he wasn’t falling into a deep sleep. I remember the first night when he made noises. It startled me, and I slid down and ran my hand along his head to make sure he was all right. He was. Now he does it on a regular basis. Sometimes he even moves his legs, like he’s running. I’ve heard some people call these moments, nightmares, but that’s not how I interpret them. I think he’s having a wonderful dream about swimming after the ducks on the Russian River or at Craigville Beach on Cape Cod. Or, maybe he’s playing with his best friend Cody. Or picking up a scent while hiking on a trail. It’s endearing and I wait for it. When he does it, I know everything is fine and Morgan is in a deep calm sleep and that we can sleep now, knowing he’s okay.

Many of us with pets are already aware of the kinds of things that scientists are just discovering. You know, things like animal emotions and language. Now there are actually studies coming out of respected places like MIT that prove that dogs and cats do indeed dream. In the scientific community, animals are often thought of as reflex machines, operating by instinct alone. But this view is slowly starting to change, and new information about dreaming in animals is unearthing.

I found this article by Maryann Mott, HealthDay from a USA Today Paw Prints post from 2010, http://usatoday30.usatoday.com/life/lifestyle/pets/2010-06-29-dogs-cats-dream_N.htm

My favorite line from her article is where she quoted Stanley Coren, Ph.D., F.R.S.C., and professor of psychology at the University of British Columbia who said that one of his heroes, Charles Darwin, “basically claimed if you can prove that an animal dreams, then, in effect, you can prove that’s consciousness. Because after all, what is a dream other than a conscious image?”

Isn’t it wonderful when Science catches up with pet owners? Share what noises your fur babies make when they’re sleeping.

Out with the old…