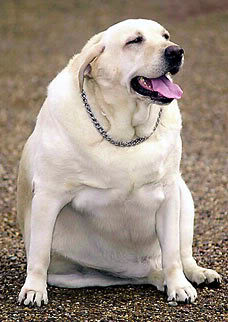 Harvest-time is here and the pumpkin pies are about ready and there’s gravy for the mashed potatoes. And there’s plenty of football games or a cliff-hanging episode of NCIS (come back Ziva. Tony isn’t the only one who misses you) on the telly to keep us couch-bound. It’s not an easy time if weight gain is an issue in your house for either 2-legged or 4-legged family members.

Are you part of the problem? Here’s an interesting fact I read in an article by Eve Adamson in Dog Fancy magazine – according to a recent Pfixer Animal Health study, many pet owners are in denial, veterinarians consider 47 percent of their pet patients to be overweight or obese, but only 17 percent of dog owners thought their own pets were overweight or obese.

“We are killing our pets with kindness,” says Cailin Heinze, VMD, MS diplomate of the American College of Veterinary Nutrition and assistant professor of nutrition at the Tufts University Cummings School of Veterinary Medicine in North Grafton, MA, the home of the nation’s first obesity clinic just for pets, according to the university. “Pet owners need to realize we have very good evidence from clinical studies that show chronic diseases associated with (being) over weight and (obese),” Heinze says. “One study showed that obese lab retrievers lived fewer years than their thinner siblings. Cancer, respiratory disease, pancreatitis and dermatological conditions have all been linked to obesity in pets.”

As a Golden owner, I know that Golden Retrievers have a tendency to grow sideways as they get older and this is not good for their legs, their heart, their backs, or for the owners of these big dogs. Nicholas never had a weight problem but still I injured my back his final 2 years when he no longer was able to get in the truck or go up and down stairs. It would have been worse if he was overweight. Willy knew right where the treat jar was in every neighborhood store that we went in to and I had to watch him more closely. Treats are a major stumbling block to cutting the weight. Morgan, unfortunately, injured his rear legs and requires serious monitoring now so that we can delay problems later on.

Firstly, it doesn’t matter to me whether you think your dog is overweight or not. The most important thing right now for any dog is to get him or her moving.  For most of the country there’s still a few weeks to get out of the house. If you aren’t physically able to walk your dog yourself ask someone else to do it. My experience is that the neighbors or an in-law would love to have the chance to walk a dog on occasion. People always volunteered to walk my dogs. Lots of people can’t have dogs and would jump at the chance to walk an animal around the block. Ask about this at your vet. You’d be surprised. It’s worth the effort.

I know first-hand how difficult this is. I am always being told that it’s best if Morgan dropped a few more pounds.  When I put him on the scale at the vet and the arrow still goes to 75 I get so discouraged.

Second, check the food intake. Maybe he is getting too many calories. Or maybe too many all at once. Especially later on when there’s a foot of snow on the ground or a mean wind off the Lake. Check the package. Even the big chains carry lower calorie food now a days. Most sales clerks at these shops will be willing to help you choose one. We’ve already made the switch to low-calorie food. Then I’ve also cut half a cup of kibble out of his normal amount and augmented it with frozen string beans or broccoli.  At first he looked at me like “what the hell is this!”  But over time I’ve learned to heat it or mix it up good by adding a little tuna juice or a little non-fat cottage cheese and he’s gotten to like it. This lowers the calorie count and still fills his belly so he doesn’t feel hungry.

Another suggestion is to spread the meal across the day so it’s not sitting there in his belly fermenting into fat. Morgan gets a cup in the morning when we eat and another cup at lunch. Then he gets his normal dinner at supper time.

As I mentioned above, treats are a tough thing to monitor. Everyone wants to give your dog a bribe and treats can modify behavior. But be strong and limit them. According to this article in Dog Fancy treats should only make up 10% of our companion’s total calorie count. Let me suggest that you carry some low calorie fresh veggie treats like baby carrots or broccoli florets with you and let people give him those.

This may seem like a lot of work but my hope is that it will prevent hardship later on and give all of us more quality-of-life time when our dogs are seniors.

The Hills are Alive with the Sounds of – MORGAN
Scroll to top #top-ten{color:white!important;)